Subtitle: Following Jesus into a Life of Peace, Compassion & Wholeness

I find it hard to fairly review study Bibles. On the one hand, I am a bit hesitant to have so much text combined with the text of scripture, because everything we do to add to the text, even arranging it into chapters and verses, tends to bias our viewpoint. But on the other hand, it is possible to provide people with necessary background and help them get more out of their study. 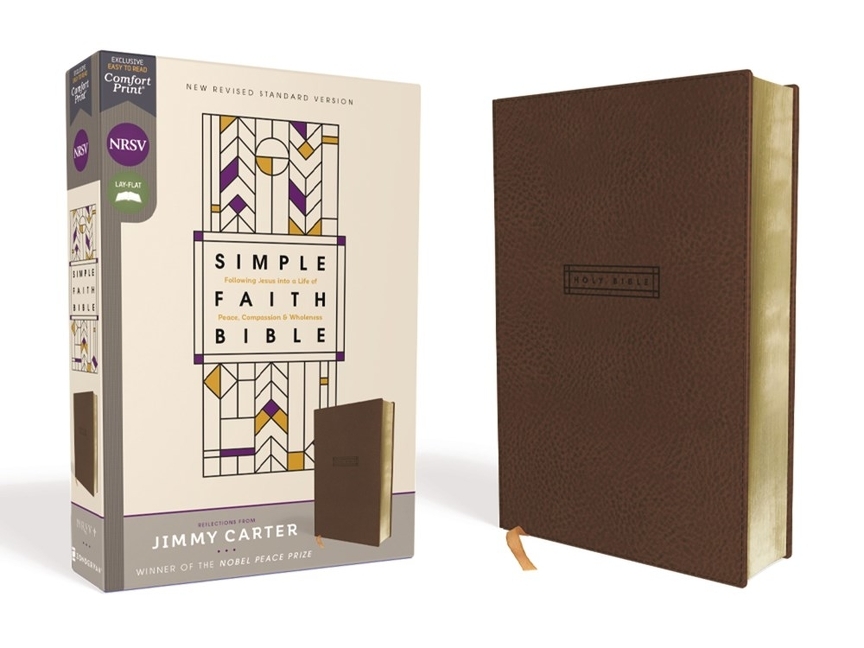 Your Call To Action

In this second sense, a study Bible is a bit like having a number of teachers gathered to help you understand the text. Few benefits come without some downsides. As I like to say, while every cloud may have a silver lining, silver linings tend to come with clouds.

So when the opportunity arose to review this Bible, I found the idea fascinating. Former U. S. president Jimmy Carter has been a Sunday School teacher for decades. While I confess that I worked diligently to get him out of office back in 1976 and 1980 as a precinct captain for Ronald Reagan, my appreciation for him as a person has grown remarkably since.

The Bible itself is the NRSV, one that I regard as quite good. The copy I received was hardcover. There is a leather bound edition, which can be found using the cover widget at the left hand side of the page. I don’t believe I need to add anything to my previous comments on the NRSV.

The paper is thin “Bible” paper. The text is of adequate size, though there is a certain amount of crowding required for the amount of text included in the edition. The introduction makes the purpose of this edition clear.

The introductions to the book are time-limited as one might expect in a Sunday School class dedicated to getting to the things the class wants to talk about. They make no effort to cover the book introduced in any detail. They are more a theological note of introduction, leaving any content to follow-up studies.

The devotional content is, well, devotional. While I could quibble theologically with some of it, most of it is just encouragement drawn from scripture, and the Baptist roots of the author are evident, though not thrown in anyone’s face. Titles like “Love That Covers” (1 Kings 2:3,9) or “Encountering God in Creation” (Romans 1:18-32) give the flavor.

The problem I had with this Bible was in classifying it. Is it a study Bible? No, I don’t think so, as it is missing most of the landmarks that would help a student understand the Bible better. Is it a themed devotional Bible? This is much closer, as the devotional content is quite strong. But I still don’t see it fitting the definition.

I recall the Spirit-Filled Life Bible that looked for the work of the Holy Spirit throughout scripture. Well I was concerned that this focus on one subject would prevent readers from hearing the main point of the text, the Bible had a devotional theme that followed through.

Unfortunately, in the Simple Faith Bible, it seems to me that the editors and layout designers of the Bibles have failed to truly wed the devotionals to the text, so that you have loosely collected devotionals bound in one cover with the text of the NRSV Bible. Yes, the content is placed with the scriptures, but there is so much that has no comment, even limited comment, and there is so much that is skipped, that the two never come together.

I would add my personal complaint. There is a view in the study of scripture that says, “Let’s study the stuff that makes us feel good and skip the stuff that annoys one.” I personally have written in defense of some form of “cafeteria Christianity.” We all do some picking and choosing, but try to deny it. Some do it by just reading the stuff we like and skipping over the stuff we don’t. Others explicitly choose, which is more honest, I think. Yet others interpret away the things they would prefer were different.

In fact, a blind selection, or one that is denied can create more divisive debates as people build their Christianity on different scriptures while pretending they are doing otherwise.

In the Simple Faith Bible we have a number of interesting cases. For example, in Romans 1:18-32, where many root debates on homosexuality, we have the “Encountering God in Creation” article, which mentions nothing about sin of any kind. Now this passage is not primarily about homosexuality, though this is not mentioned, but it is also not primarily about encountering God in creation. It is rather saying that humanity is wicked and lacks a good excuse. This leads up to informing us that God has an answer for the humanity God created.

In Numbers 31, as the Israelites slaughter infants, we have a note about God’s attitude to wealth. I once called this an “unpreachable passage” while trying to propose ways from preaching it. We may not like it. In fact, we probably don’t, but if this is a devotional Bible, might someone decide to read it from cover to cover? If so, what about the difficult stuff?

In Leviticus 19, verse 32 elicits a note on caring for the elderly, but skips verses 33 and 34 about treating the aliens living among you well. On the other hand, we miss Leviticus 18:22 which is famous again in the homosexuality debates. My hermeneutical challenge to both sides is to create a hermeneutic that applies the texts you want to apply and bypasses the others without using some form of special pleading. Of course, the very challenge I am making calls for special pleading, so no takers so far!

Bottom line on this is that I find quite a number of the notes by Jimmy Carter quite uplifting and helpful in a devotional sense, and appreciate them, but I would probably prefer them in their own devotional volume to be read separately. In a devotional book, you understand that you are dealing with passages that happened to strike the author in a particular way.

As a Bible, this is fine. The devotional that happens to be bound with it is uplifting. The combination … I find troubling.

I received a free copy of this Bible from Zondervan in exchange for an honest review, and blog as a #BibleGatewayPartner.