This review is of a Bible I received as a #BibleGatewayPartner.

When I set out to review a Bible, I find it difficult to determine precisely what I should discuss. There is the translation it is based on, the nature and extent of the notes, the theological positions that drive those notes, and elements of the edition such as text size, arrangement, and paper quality.

In approaching the Grace & Truth Study Bible, edited by R. Albert Mohler and published by Zondervan, the question became even more interesting when I added it to my Bible store, and found that my distributor has 17 editions/formats available, ranging in price from $39.99 (unjacketed hardcover) to $279.99 (Premium Goatskin, gilded edges). The edition I’m reviewing is priced at $49.99, and is a jacketed hardcover.

I’ll begin with a few pictures.

The production is of good quality, as you would expect from a Zondervan product. The layout is quite traditional for a study Bible. You have an introduction to each book, notes at the bottom of each page (allowing me to continue to remind classes to read from the upper part!), and cross-references in the center of the Bible text. In the back you’ll find a concordance and some fairly standard Bible maps.

Other editions have some variations on this, such as different page sizes, binding, and paper.

Overall, there is nothing to criticize about the layout, and in fact, I kind of like the straightforward approach. We don’t have numerous “features” added that really tend to detract from study. There is a text, and there is a commentary, one study Bible! I think few modern readers make great use of cross-references, but it is nice to have them.

The big weakness of this particular edition is the 9 pt font. I found it hard to read extended portions of the text. I’m just five years short of three-score and ten, and thus my eyes may not be quite as good as those of some readers, but I read extensively and rapidly, and reading this Bible feels like work.

It’s important to note, however, that several of the editions do have larger print than the one I’m reading, so one can look at the page and font size and choose a better compromise along those lines.

The translation used is the New International Version. My general comment on this edition is simply that it is a compromise between woodenly literal and freely interpretive dynamic translation work. This means it suffers from the problems of both formal and dynamic equivalence, but it also shares in the benefits. There is no such thing as a perfect translation, and the NIV covers a great deal of ground. It is definitely evangelical in flavor and thus it is not surprising for it to be the basis of this study Bible, considering the general editor. You can find brief comments on the NIV at My Bible Version or in my book What’s in a Version?

First, let me note that I do not intend to criticize this study Bible for differences in theology. Dr. Mohler is a Southern Baptist and I’m United Methodist. The header of this blog proclaims me a “passionate moderate, liberal charismatic,” and while each word of that description brings up issues when applied to my theology, it does not suggest that I’m a conservative evangelical. A book edited by a conservative evangelical is one I expect to be, well, conservative and evangelical. And this book is that.

I strongly recommend that Bible students have on hand study Bibles that disagree with them as well as ones that are from their own theological tradition. I have gotten valuable insights by comparing the comments in various study Bibles.

The commentary is not dedicated to railing against theological opponents. I would describe most comments as gently conservative, but often not putting controversial issues front and center. For example, in the introduction to Genesis there is a comment about treating this not as a scientific or historical account, but understanding it as theology and even as a work of art. I know of people all across the spectrum who would find the literary description of Genesis as quite acceptable. Conservative evangelical interpretations are espoused in the notes as one would expect.

Another example is Romans 1, which is a frequent citation in arguments about homosexuality. The notes do, in fact, express a conservative view, but it correctly (in my view) see the primary point of the passage in idolatry, and it places idolatry at the foundation of human sin.

Book introductions don’t spend a great deal of time on issues of dating and authorship and don’t enter into controversies on these issues, but do assume a relatively conservative chronology regarding the writing of the text. For example, you could read the introductions to each of the gospels and miss any issues of authorship and dependency between the various writers.

The strength of the notes is that they are a nice blend of theological and devotional. Some study Bibles emphasize giving you technical and background details that you might not know. While you will get some of that from this Bible, the devotional value appears to be primary. I would say that this is a sort of theology that is readable by the average Sunday School class. It is not seminary material. It doesn’t give you a list of options for various issues, but basically preaches its way through.

Overall, I found nothing surprising here. The Bible was very much as I imagined it would be when I first looked over the descriptions involved. I personally wouldn’t recommend it as your sole study Bible. There is a strong possibility of absorbing relatively controversial conclusions without being alerted to the possibility of disagreement. That can be nice for morning devotions, but not as your sole opportunity to study.

I do think it would be valuable as one study Bible out of a set that one uses to study. The other study Bible should be from different tradition streams, and also with a different emphasis. There are a number of evangelical study Bibles that do more analysis of the issues, for example. That may be less devotional, but if you want a balanced perspective, it’s good to know what other views exist.

Note: I received this copy of the Grace & Truth Study Bible as a #BibleGatewayPartner, with the only requirement being an honest review. 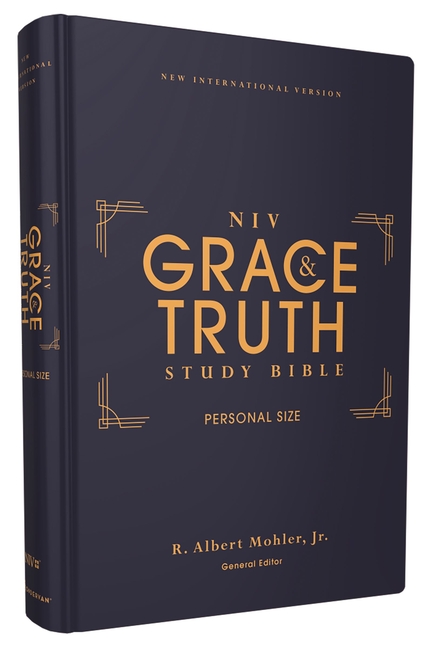